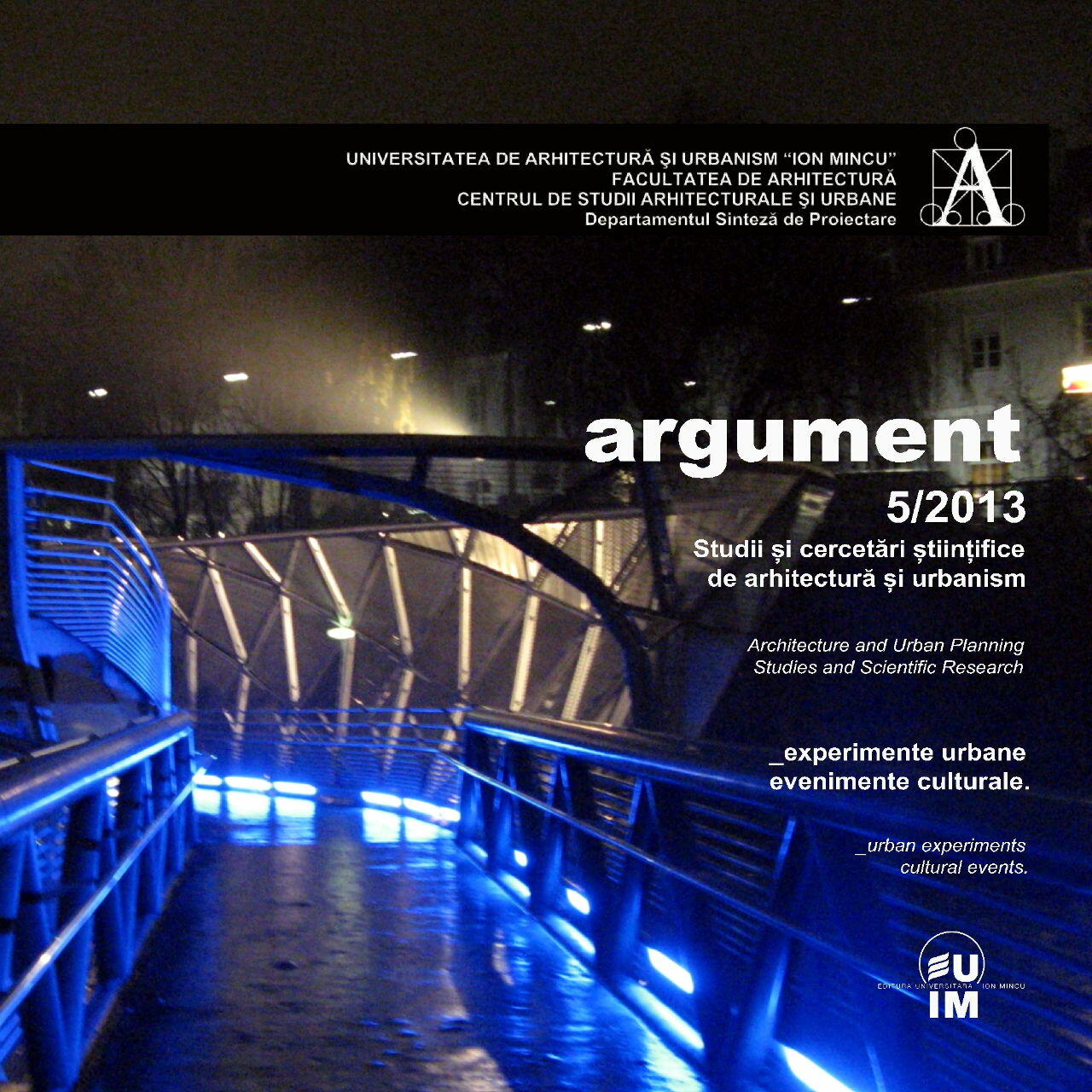 The fifth issue of the ARGUMENT publication interdisciplinary explores an overlap of two distinct areas, querying the transition from the urban experiment to the cultural event.

To what extent the urban act, spatial modelling phenomenon can be culturally interpreted and to what extent an experiment can become an event? These are two questions to which the authors of the articles collected in this volume attempt to answer, drawing the image of a limit area that takes the shape and characteristics of both systems in contact, of an eco-tone of the experimental and eventful cultural urbanity. In such a limit and transition area it is required to specify the meanings of the two terms of the binomial.

The urban experiment involves research and design methods which are based on a different reading of the context, focusing on creative industries, urban recovery, connectivity, inclusion and change. It values the process, development, sequence of events, defining for a course aimed at urban transformation, be it temporary or permanent. If the experiment has earned a place in the urban practice relatively recently, we can say the same about the cultural event that has a long, multi millenary tradition, though being linked to a culture consisting of quantifiable, fixed or perennial procurements. Disengaged from tradition, the contemporary cultural event carries the meaning of an open culture, of creative space in constant evolution and transformation, able to integrate the experiment.

The texts are grouped into five thematic categories. The first one, International urban experiments, groups contributions that detail the urban creative workshops of TU Delft, it presents international cultural centres, and also a contribution that draws attention to the disastrous urban experiments that involve forced evictions and relocations of the population, destroying the cultural identity of the local communities.

The second section, dedicated to the Cultural space_ Show space, shapes a mosaic of trends emerging in urban experiments to the public space, viewed not only as a framework for the deployment of theatrical, exhibition, museum events or happening, but also as a vector that contributes and determines the content of these cultural events. The intercultural space, with highlights in the nodes of certain increasingly diverse informational networks, causes shifts and hybridizations of the cultural programs, conscious of the emotional perception that they potentiate in the user.

Social Architecture becomes an urban experiment field which generates an architectural framework where it cannot appear, it proposes the inclusion of vulnerable groups through cultural activities, carried out in disadvantaged communities. Forum-theatre workshops, doll manufacturing workshops, contemporary dance workshops are combined under the umbrella of a community building program and become part of a non-formal education that stimulates creativity and interaction.

The fourth section devoted to Urban Regeneration_Architectural Reconfiguration, presents examples of urban recycling through conversions that produce cultural oriented spaces, spaces of memorial architecture, of experiment in the space envelope.

The last section, Landscape Architecture, proposes a reading of the landscape sites of the city through the lens of experiments and events, which they may encourage through the introduction of a different urban scale, sequentially perceptible, analyzed from a psychological perspective on the relationship between the individual and the landscape.

All the texts that form this volume call for a reflection on the urban space through the cultural potential that it can achieve through experiment. Tied, already inextricably, to the social networking, to the new-media, caused by cultural overlapping and exchange, the urban space acquires new meanings by accepting and encouraging this experiment. The event-sequence writes a palimpsest, recorded in the collective memory of the city’s inhabitants, thereby assuming a new inter-cultural identity, constantly evolving and based on belonging and social inclusion.

Magdalena Stănculescu
Theatre in the urban space. Tendencies of the theater representation at the beginning of a new century

Anda-Ioana Sfinteș
Street museum. Taking the museum activities out in the public space

Maria Boștenaru Dan
The presence of the forest in the city of Karlsruhe, Germany and Carei, Romania – occasion for cultural events

Cristina Enache
Interventions in landscape - from event to experiment